Tasmania’s Wild West – where the landscape is as wild as the people.

The old man squinted at me through shrunken eyes. I had just asked if he’d ever gone overseas. “I went to ‘Straya [Australia] once.” he replied.

Though Tasmania is as much a part of Australia as any other state, in almost every respect the island is a world away from what locals call ‘the mainland.’ It was the first official day of summer, but cold greeted me as I stepped off the 10 hour ferry from Melbourne, and I had even read in the newspaper that it was snowing in other areas. Snow. In Australia. In Summer? I regretted leaving my sleeping bag in Singapore on the naïve British belief that Australia was a hot country. 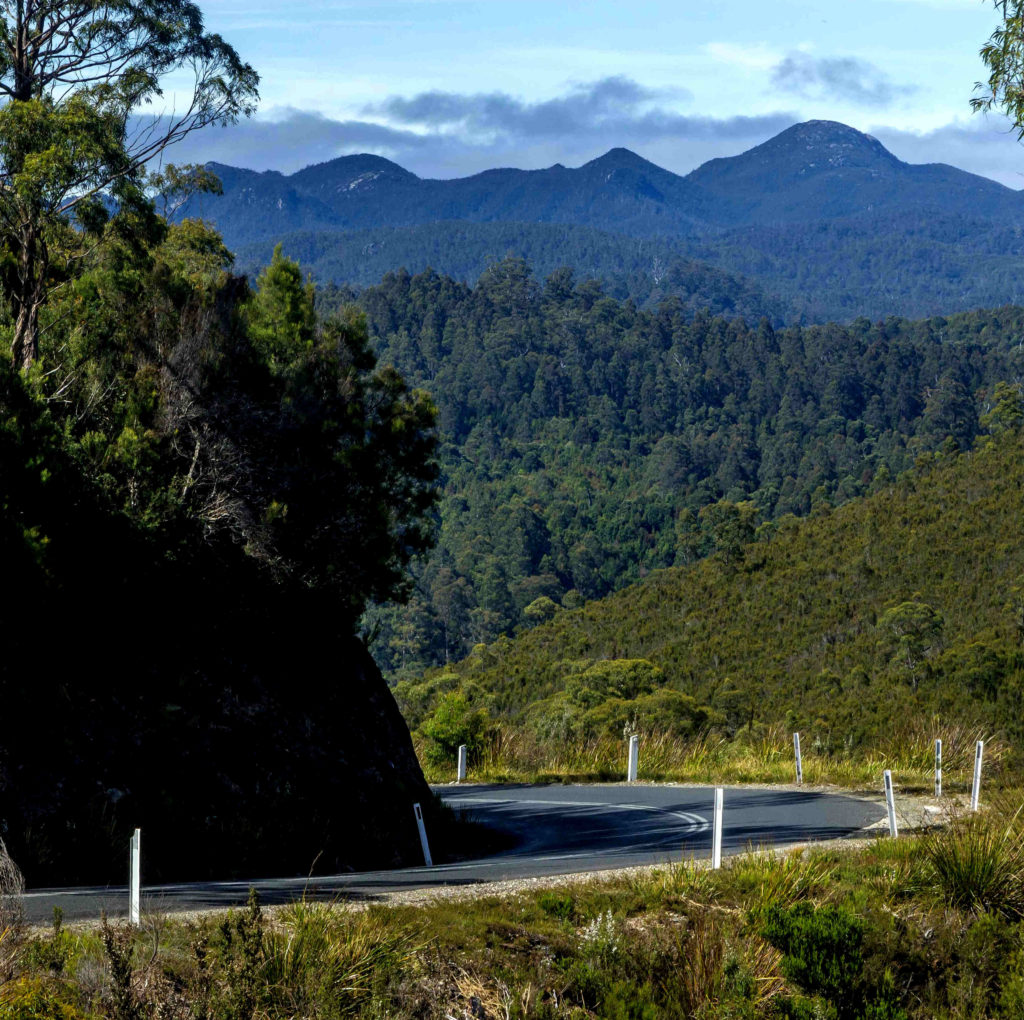 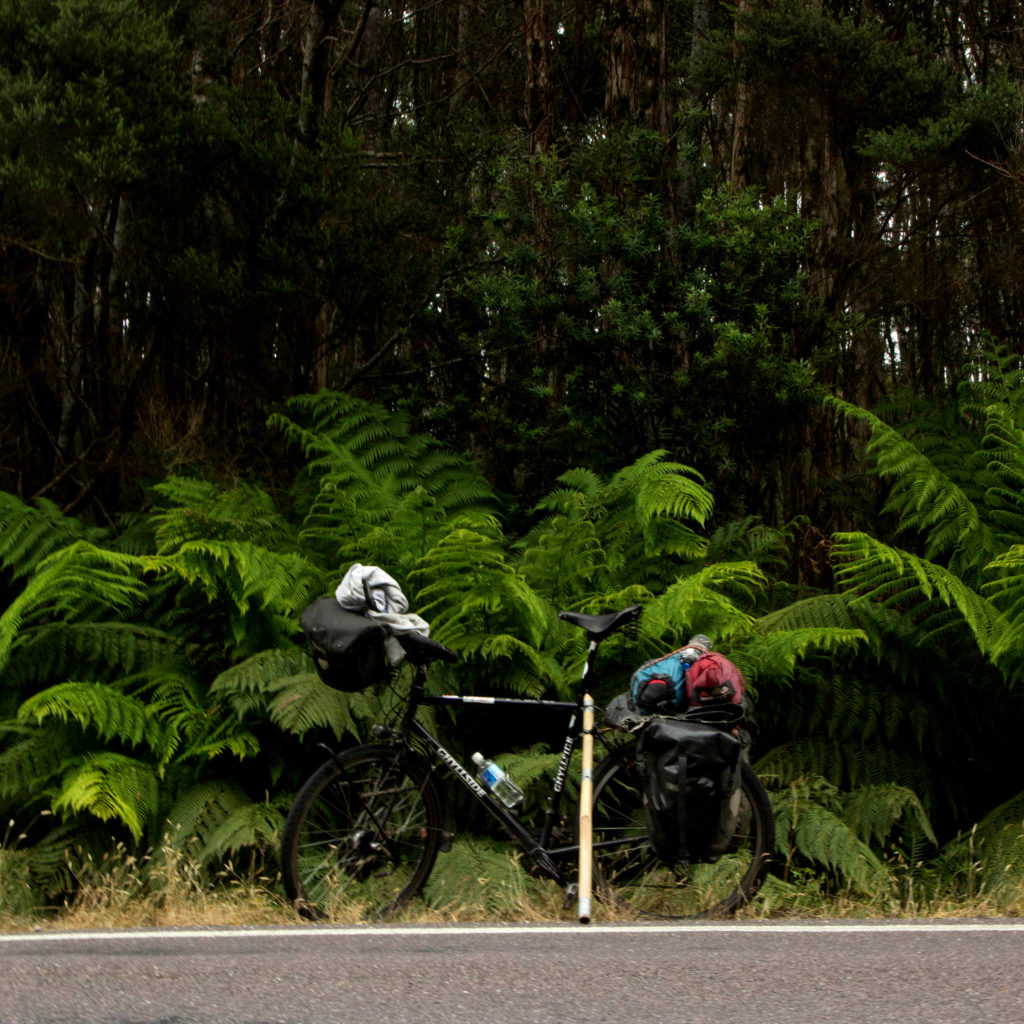 From the ferry I cycled through the hills and up to Cradle Mountain.

The roads were steep with little traffic, passing through forests, small villages, and fields of sheep and fragrant lavender. Life was slow and most people I saw were on holiday plodding around in campervans, or they were locals who appeared to be permanently on holiday anyway.

Tasmanian traffic mostly favours the gentler eastern side of the island. Only a few roads penetrate the rugged west, a land of mountains and the Tarkine Wilderness.

But it was the west I had come for, and so from Cradle Mountain, I turned right and headed into the Tarkine.

The light struggled to pierce through the trees which had grown across the road, and made it feel cold and gloomy. The lifeless air was silent other than the crackle of my breath in the fresh air, and the slow drip of water from somewhere. Everything was green and covered with a thick cushion of moss, fallen like snow.

Tasmania separated from the mainland around 12,000 years ago when sea levels rose, and now sits isolated in the Southern Ocean, miles from land which has allowed a unique environment to develop, with wildlife found nowhere else in the world. The elusive and nocturnal Tasmanian Devil is the most famous. I tried to camp near roadkill, in the hopes of hearing one scavenging at night, but I never awoke to see one. That’s not to say the roadkill hadn’t mysteriously disappeared by morning.

The island’s peculiar wildlife fascinated me, and I was lucky to see giant tree-ferns, wombats (fat and cuddly-looking), echidnas (hedgehogs on steroids) and a platypus (a duck which looks like it had been flattened by car). 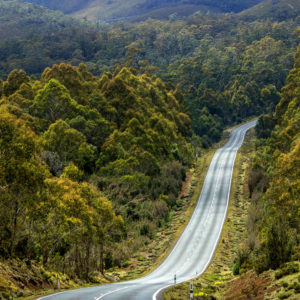 I pedalled through the Tarkine stumbling into sleepy pockets of civilisation, which punctuated the wilderness. These settlements were filled with hard, resilient locals, who struggled along hoping the mining industry would resume again. It felt like cycling through a film set of the wild west with each village comprised of wooden houses, a quaint post office and community store, and of course the pub, which formed the centre of every settlement. These communities felt insular, and I sensed a general distrust and coldness towards outsiders.

Remnants of the rich mining history were everywhere, and marked an ugly juxtaposition against the scenes of nature. The hillsides around Queenstown were cleared of all trees to fuel the fires for the smelting process. Savage River seemed to be an accurate name for the settlement. I feared a painful, radioactive death if I went for a dip in one of the unnaturally green pools of water. The mountain behind Waratah was heavily quarried with $400 million of tin removed already. Apparently, there was still plenty of tin there, but the price was too low to justify extracting it.

Cycling through the west of Tasmania showed a fascinating insight into a conflict between nature and man. Perhaps surprisingly, nature appeared to be winning.

The region was beautiful, and I looked forward to discovering more of what the island had to offer.